For the 5th year of architecture school, the students traveled to Italy as a class to study architecture for a week. After the Italy class trip, students had the option to stay longer and travel around Europe. Cord decided to go to the cities of Dresden, Leipzig, and Rathen in Germany. He wanted to go to Germany because of the history associated with the World Wars and the variety of architectural styles.

Dresden:
Dresden was bombed and completely destroyed in 1945 during World War II and was rebuilt after the war. One of the buildings that he was interested in seeing was the Frauenkirche (Church of Our Lady). It was originally built in the 18th century and was destroyed during the bombing. It was eventually rebuilt in 2005 with some of the original stones which are black and charred. He also saw other the Semperoper opera house and the Zwinger Palace museum.

Leipzig:
He was only in Leipzig for a few morning hours and walked around the city trying to see as much as he could within that time. He saw St. Thomas Church, St. Nicholas Church, Leipzig University with Paulinum (a church built in place of the original university church that was destroyed in 1968).

Rathen:
Rathen is a village near the Czech Republic border along the Elbe River and was founded in the 13th century as a castle fortress.

The 2019 BSA Christmas Card presents “The Flat Iron Building, now and then” 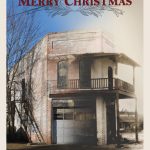 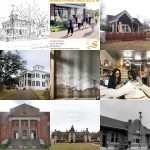 BSA Best 9
HOW TO GET IN TOUCH