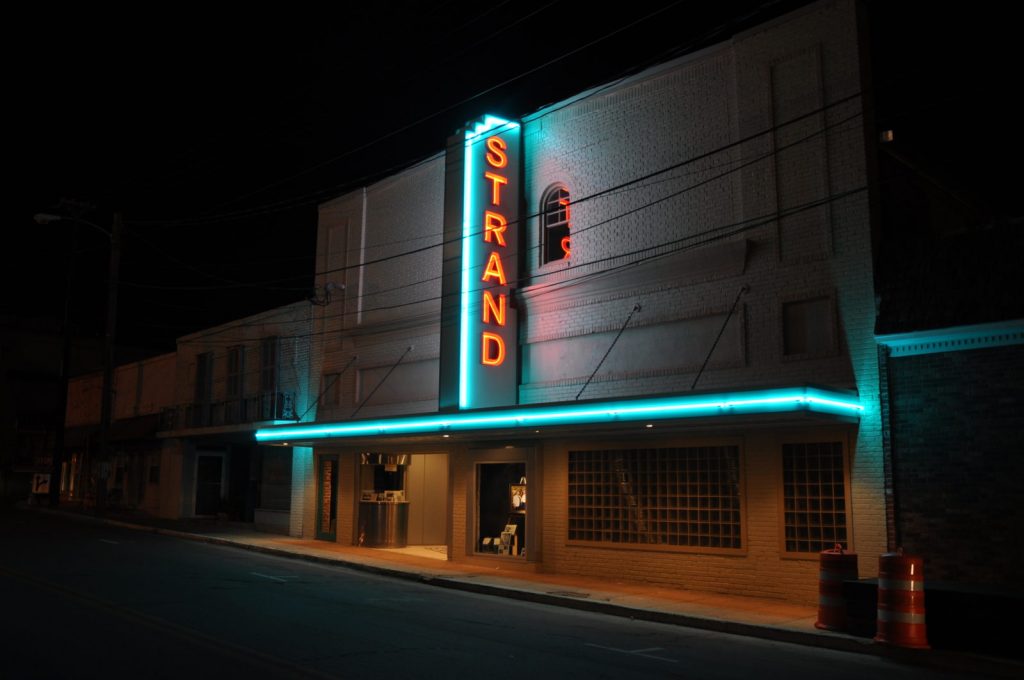 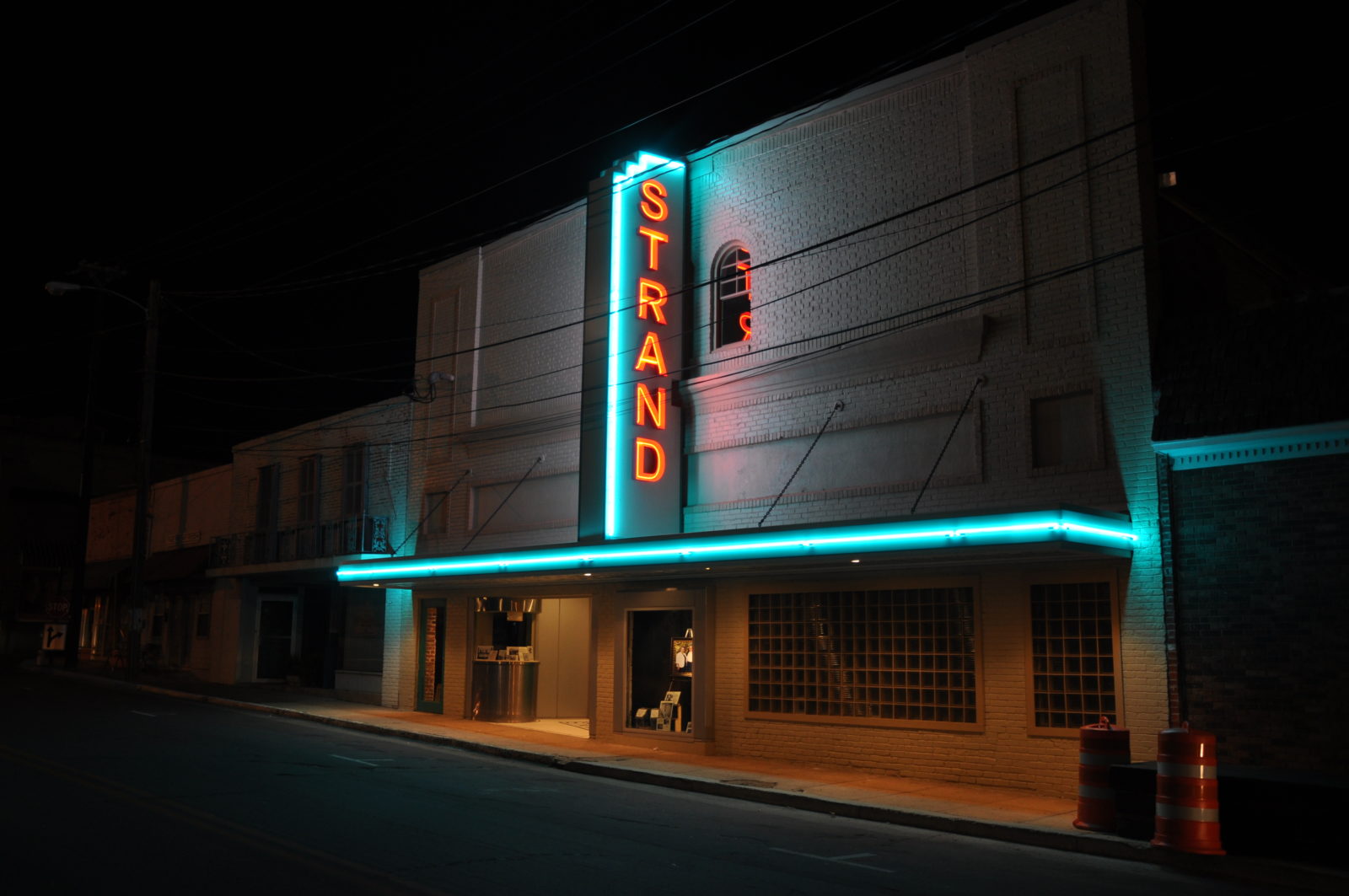 KOSCIUSKO — It was a night to take a stroll down memory lane for Kosciusko residents and head to a place where a host of memories were made.

The City of Kosciusko celebrated the first phase completion of the facade, signage and new roof of The Strand Theater on North Madison Street with a lighting ceremony May 9 in Downtown Kosciusko.

Passersbys peeked into the windows where memories of a different time were on displayed and local artists’ work was featured.  The original box office showed off photographs and “Gone With The Wind” played in the doorway of the former theater.

Memories filled the air as  Diane Boutwell-Grey reflected on the impact The Strand had on a community, prior to flipping the switch to light the theater.

“Our dad, Cleo Boutwell, was the official manager of The Strand but, it was really a two-person deal, which included our mom Lula Mae. Together they managed The Strand from about 1956 until 1994,” Boutwell-Grey said during the short ceremony. “They raised not only five children of their own but, they raised a whole community of children, who are now parents and grandparents.

“Before today’s technology, movies were our window on the world,” Boutwell-Grey said. “For many of us our first glimpse of the outside world was seen right here in the flickering lights of the screen  of the old Strand Theater.

“You formed your childhood memories here. You made your first timid steps in public by yourself as your parents dropped you off in front of The Strand, knowing that, of course, they didn’t need to worry about your safety under the watchful eye of Mr. and Mrs. B,” she said. “You laughed together here, you shivered in wonderful anticipation watching things that go bump in the night horror movies. You had your first date here.”

“Many of you entered the work world trained under the watchful eye of Mr. Boutwell right here at The Strand,” Boutwell-Grey said.

“And, so we are here today. Her exterior is restored to a beautiful 1950s glow,” she said. “Some parts, like the box office, reflect the bumps and scraps of 60 years of living – Evidence of time too precious to sand down and smooth away.”

“She’s a grand old lady – The Strand. Her cosmetic exterior smooth and lovely. She has good bone structure and carries her age well,” Boutwell-Grey said. “The kindness and diligence of people who have been able to see her beauty have given her a new life to once again become a vital part of our community.”

Boutwell-Grey said, “She (The Strand) waits patiently for her completion to once again welcome us inside.”

“The Strand can continue to provide services for Kosciusko. With the completion of the interior, she will be a wonderful venue for small business meetings, conferences, pageants, musicals, plays and art exhibits,” Boutwell Grey said. “And how will this be accomplished? Grants and fundraising projects are , of course, a vital cornerstone for the completion of the Strand but important also is your participation and support.”

She said the future of The Strand lies in the community’s  hands.

“Looking at The Strand, I can almost hear the sound of dad checking up in the office, jazz music playing softly playing in the background or see mom standing by the door smiling, cautioning children to mind the traffic and have a good night,” she said. “I can tell you that my parents would be so pleased to see The Strand coming into her own again, reinventing herself for a new age.”

Kosciusko Mayor Jimmy Cockroft said it was evident how people longed to go into The Strand’s doors.

“I know a lot of you have hung around the door and hoped you could get a ticket and reminisce just a little bit,” Cockroft said.

There is no time frame on the project. However, the inside of The Strand will have to be totally re-done.

“We don’t want to waste your money. We want to be good stewards of your money,” Cockroft said. “We do want to finish this at some point.”

Cockroft said he didn’t want to limit the possibilities of The Strand.

“From day one, we have said that this would be a multipurpose building that could be used for numerous things,” he said “Too many for me to mention.”

“This a special time for us as a city and community to come together and celebrate a project that has been in the works,” Cockroft said.

Cockroft thanked the aldermen  for their support of the project.

“I just appreciate them for having the vision to help improve things in the community,” he said.

Members of Kosciusko’s Big Red Band performed to kickoff the event with members of the Kosciusko Mayor’s Youth Council serving hot dogs, popcorn and drinks to those in attendance.

For the first phase, the project received grant funding in the amount of $146,500. The largest grant was from the Mississippi Arts Commission in the amount  of $135,500. As with most grants, the city had to match a percentage of the grants funds.

The bid on the facade, roof, sign and canopy was awarded to Historic Renovations  of Yazoo City for $245,000.

The City of Kosciusko bought the property in 2007 from Emma Ivester  and the late Reid Ivester for $50,000 and hired the architectural firm of Belinda Stewart Architects to help with the project. 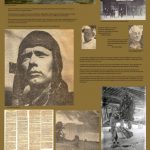 Charles Lindbergh Landing Site
HOW TO GET IN TOUCH