Old Armory on Fairgrounds to get roof as it awaits restoration 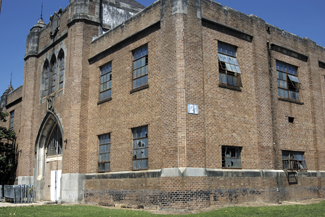 Keeping the circa 1927 building in the dry will buy years of time, architects say.

With its roof long gone and its walls wavering, the old Hinds County National Guard Armory has become an eyesore and a safety hazard on the Mississippi State Fairgrounds.

Some day it may get a multi-million-dollar restoration, but for now the Mississippi Fair Commission wants to stabilize the historic landmark and slow a steady deterioration that began with the Easter flood of 1979. To that end, commission members eagerly accepted an offer last Tuesday of a $600,000 grant from the Mississippi Department of History and Archives. The main task is to put on a roof to stabilize the walls, said H.T. “Hank” Holmes, executive director of the Department of History and Archives. “This will give us time to seek added funding,” he said.

The $600,000 will come from a Katrina recovery fund and has no restrictions on its use, according to Holmes, other than completing the work by next June. Fair Commission members are hoping a little money will be left over for cosmetic improvements to the exterior of the circa 1927 building and rare example of early 20th-century Gothic Revival architecture. For visitors to the Fairgrounds who enter off Jefferson Street, “this is the first thing they see,” said Agriculture Commissioner Cindy Hyde-Smith. “That’s one of my main concerns.” When people leave the Fairgrounds, she wants them to say, “‘Wasn’t that a great place to be in Mississippi?’” Instead of, “‘Did you see that building?’”

Holmes said his department’s goal is to preserve the 85-year structure as a Mississippi Landmark, a designation it received in 1986, followed by inclusion on the National Register of Historic Places in 2000. Though Holmes initially cited a range of $7 million to $10 million to restore the building, he later said the job could be done for around $5.4 million. 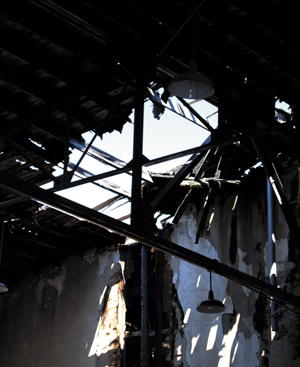 Deteriorating since the Easter Flood of 1979, the armory is currently not only an eyesore but a safety problem, as well.

The building is the oldest known 20th-century armory still standing in the state.“Perhaps the greatest historical importance of the Armory is the key role it played in the mobilization and induction of Mississippi National Guard troops into federal service during the early years of WWII,” the Department of History and Archives said in a write-up on the Armory.

In the years before World War II, the Armory became a social center for Jackson, hosting dances, banquets and weddings, Holmes said. He said many supporters and groups around the state want the structure saved and are looking for private contributions to help with the effort.

The Armory has been abandoned and un-maintained for many years. Nonetheless, the building is structurally sound and feasible to restore, according to a study by Belinda Stewart Architects. The $600,000 for the roof and other work would put the building in “the dry” and buy many years of time to raise money for the restoration, the study concluded.