Built in 1905 the Historic Bay Saint Louis City Hall is one of the older commercial buildings in the city, surviving Hurricane Katrina damaged but still intact.  The City recognized the historical value in the building and began an exterior rehabilitation project.  The City of Bay Saint Louis envisioned a new use as a community facility.   Through the years the building was modified to suit the City’s need with additional walls and modern systems – all these finishes and equipment were damaged during the hurricane.   The non-original finishes were removed to discover the original configuration of spaces including jail cells, a sheriff’s office, original door locations and original finishes.  With this information, BSA developed a plan to provide a meeting room, kitchen, ADA access, and restrooms on the lower level and a conference room and offices on the upper level.  The restoration repaired existing finishes, and matched finishes/details where deteriorated.  New mechanical, electrical and plumbing systems were sensitively installed, including a fire sprinkler.  Acoustic treatment helped isolate the two levels while maintaining the original appearance of exposed beams on the lower level.  Handicap accessibility was improved with exterior ramps in less visible locations and installation of a new lift.  Historic doors were repaired and new doors/transoms replaced to match were doors were not available for reuse.  Solar shades were installed to maintain historic character of the windows while minimizing heat gain. 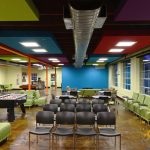 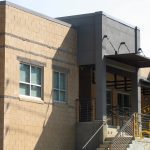