The restoration of 61 North Dunn Street is part of a continued effort for downtown revitalization in Eupora. The intent of this project was to reflect the creative practices of Belinda Stewart Architects and provide an example of the impact historic preservation and revitalization plays in a downtown setting. The newly renovated storefront is closely based on evidence of the rigid storefront. It incorporates a new decorative awning (inspired by photos of the original awning), restored stucco base, reconstructed wood and glass storefront, patterned glass transoms and restoration of the original triangular inset with ceiling fan. The intent of the color scheme was to bring a more lively and historic approach to color back to the downtown.

The interior of the space retains its open layout with low partitions dividing the various work areas. Original remaining elements were restored and incorporated into the design including perimeter shelving, free standing display tables and original floor, wall and ceiling materials and finishes. The existing mid-century suspended light fixtures were also restored and reused. Color remains a celebrated element on the interior. 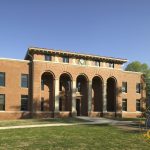 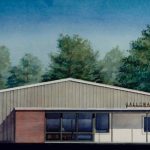 Galloway Construction Company Headquarters
HOW TO GET IN TOUCH