Bolivar County Courthouse is located in Rosedale’s historic downtown which at one time thrived with growth and culture. Over the years, the character of the downtown along with the courthouse diminished. The courthouse had become stained, weathered and as the water table dropped the foundations became unstable causing portions of the building to settle and the masonry to crack. In particular, the massive vaults on each end sunk as much as 10 inches causing roof drainage problems and large cracks to develop which exposed this Mississippi Landmark to further damage. To stabilize and restore this historic structure, helical piles were installed to lift the vaults and then the cracks in the masonry and stone details were stitched back together and the roof was replaced. On the interior, large cracks had formed due to the extreme movement but also years of sporadic, uncoordinated renovations had obscured and damaged the historic details and finishes. The restoration revealed the courthouses’ historic character and has spurred a revival of repair and restoration downtown. Grant writing assistance was also provided, helping to bring approximately $1 Million in additional funding to the project. 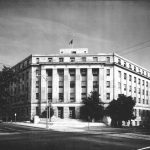 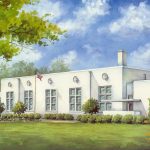 Eupora High School
HOW TO GET IN TOUCH