The original portion of the Canton Depot was constructed in 1890. By 1926, the north and south buildings were added and the original portion bricked and roofed to match.  The Illinois Central Railroad Company owned and maintained the depot until 1991 when it was purchased by the Canton Redevelopment Authority (CRA).  The Restoration of the depot, completed in 1999, was primarily funded through the Mississippi Department of Transportation’s ISTEA program.   The project was started by Architect John Robbins, and completed by Belinda Stewart Architects, after Mr. Robbins relocated to another region.

The restoration project included restoration of the building’s exterior, rehabilitation of the interior to house the Chamber of Commerce and the Canton Depot Museum – reflecting the history of Madison County and how the “iron horse” affected social and economic growth and development, particularly the area in and around Canton. The project also included site development to reclaim the former depot “yard”, repurposing it as a landscaped public plaza. This restoration of the depot helped spur additional redevelopment in the area. 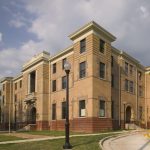 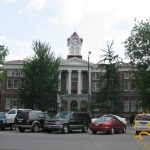 Marshall County Courthouse Master Planning
HOW TO GET IN TOUCH