Belinda Stewart Architects was hired in 2012 to execute an Existing Facilities Report and Phase 1 renovations for the Clarksdale Civic Center located at 506 Second Street within the local historic district of Clarksdale. The project was funded in part by a Mississippi Department of Archives and History Community Heritage Preservation Grant.  The building was designated a Mississippi Landmark March 2003.

The historically significant Civic building, completed in 1940 and designed by E.L. Malvaney is made of poured in place concrete.  The building was designed in the modern style, to be the center of civic activities in the community, accommodating both large and small gatherings.  The double height auditorium space, with an elevated stage, fly and elevated seating, is flanked at the east and west by one story office, kitchen and smaller gathering spaces, and to the south by a two story office space (originally an armory for the National Guard). The exterior detailing is in keeping with the modern style, with rounded corners, vertical rounded cast pilasters, low-slope roofs, with the most visible decoration being the plaster, bas relief figure of a robed figure at the north wall (called “The Indian” by Clarksdalians).

The construction undertaken as part of the grant project included the findings from the existing facility study; which included restoration of the exterior concrete façade and painting, doors & metal window restoration, re-roofing the building and upgrading electrical and mechanical services.  In addition, interior plaster repairs were undertaken to the exterior walls that sustained damage from water infiltration, and minimal interior finish upgrades, including interior window shades and painting.

The City of Clarksdale was committed to the rejuvenation of this landmark as the key civic “center” of the community.  The building’s accessibility and full usefulness remains vital to educational and community growth. 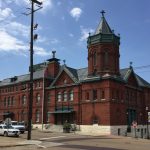 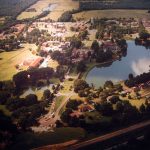 Mississippi State Hospital Campus
HOW TO GET IN TOUCH