History
In 1914 John D. Rockefeller challenged the students of Mississippi State University to build their own space on campus, the YMCA, by donating $40,000 and asking them to raise the remaining $20,000. Dr. W.A. Weatherford, an official of the Southern Area YMCA, came to the university, organized the students, and led the fundraising campaign. The money was raised and the three-story masonry building was designed by Mississippi Architect N.W. Overstreet and was erected in 1914. The building originally contained a barber shop, café, bowling alley, recreation and game rooms, library, bookstore, small post office, classrooms, and hostel rooms.

Preservation
Much like the original challenge for construction, MSU was now challenged to renovate the greatly-loved historic YMCA building to meet today’s standards. It had undergone multiple renovations and had become underutilized. It also had become central to recent development and is currently adjacent to the Student Union, the President’s Office, and the new unassigned 90,000 SF classroom building, Old Main Academic Center. The YMCA building was sometimes called “the post office” because that was the only tenant that had remained over the years, but MSU planned to regain a student focus by housing the Dean of Students, Student Affairs spaces, and other offices. These offices were to provide a direct bridging connection to the Old Main Academic Center and the Student Union – making this building the final built connection for the historic core of the MSU campus. MSU believes that student retention is impacted by not only the classroom and study environment, but by student life on campus and that a pleasing campus is integral to students’ perception of their experience.

This renovation project began with an in-depth research and building analysis to determine original locations of walls, finishes, mortar and masonry composition, ceiling and floor plate construction, soil analysis, and coordination with MSU library services, the Landscape department, and other master planning input to direct the restoration efforts. The resulting project included the complete interior and exterior restoration and renovation of the historic building and the surrounding site to address the new program, including handicap accessibility, covered walkway connection to the new classroom building to the north, and planning to accommodate five different using offices within the building. The project was designed to sensitively incorporate current technology, safety upgrades and energy efficiency (achieving ASHRAE 90.1 / 2010 by greater than 30%), limited expansion of the campus energy loop, and thermal storage pods while regaining the building’s historic character.

The building’s first floor was heavily renovated in the 1950’s to house the university Post Office and the second and third floors were used for different offices and organizations, usually in interim. The building first floor was renovated to regain the original character, including the reconstruction of the two grand stairways that once extended down from the main lobby area on the second floor, and reconstruction of original bead board corridor walls evidenced in a single mechanical closet. This floor was also designed in conjunction with the adjacent new construction to provide a covered ADA connection for faculty and students. The upper floors were largely restored; uncovering and reusing the original spaces and layout while incorporating necessities such as a fire sprinkler, elevator, restrooms, MEP, and fire stair. New, modified partitions were kept to a minimum and suspended acoustic clouds placed in offices to provide acoustic quality while exposing the original ceiling and trim at the perimeter. Low floor-to-floor heights between the second and third floors required creative solutions for installation of equipment while maintaining the original plaster and wood beam ceiling. Two lengths of beams were carefully dismantled so that piping and conduit could be run through the cavity and reassembled to provide the original ceiling appearance and configuration. The original terrazzo at the second-floor lobby and entry porch were restored and repaired along with original doors and transoms, wood windows and stone sills, plaster walls and ceilings, and original wood trim. Knives were made to reconstruct the original wood trim pieces where needed and new led fixtures were selected as closely as possible to the original fixtures seen in historic photographs. This lobby, once heavily used for student dances, holiday parties, and studying, is now used again for similar orientations and socials and the front porch once again holds rocking chairs for students to relax. The exterior restoration included masonry restoration and water infiltration mitigation where portions of the building were below grade, and sidewalks and grade were modified to prevent future damage. Interior pointing and exterior pointing were required along with pointing at each façade and stone banding and sill repair.
The program for the YMCA renovation was impacted by the MSU Administration’s desire to develop connections within the campus landscape for a rich and meaningful experience between the student and administration. The placement of the Dean of Students on the first floor was intended for direct student access and the second floor (where the lobby/gathering space and front porch are located) was perfect for the Student Affairs office. The third-floor placement of the General Council and Budget and Planning departments seemed appropriate since they require less interaction with students on a day to day basis. The third-floor porch, once condemned, provides a wonderful and private outdoor space with tables, chairs, and rocking chairs. The original materials remain and were restored, including the concrete floor and metal railings which were appropriately modified to meet guardrail requirements along with door-sensitive door alterations to provide handicap accessibility. The third-floor office spaces were minimally modified to reconstruct the original layout while protecting significant historic details. The rear portion of the third floor was originally part of the auditorium space, including a balcony opening from this level. The auditorium had been gutted decades earlier, including the balcony. This project sensitively incorporated additional office and meeting spaces and a fire stair into the former auditorium space – leaving wide, full-height hallways on the sides to retain the character of the large auditorium space.

“A renovation project where the interiors highlight the past but also create a very modern space.  It was wonderful the way that it was woven together into a narrative that really truly continues to bring a building that many of us know quite well, to life in a new way.” – Kimberly Brown, AIA MS Awards Juror, 2019 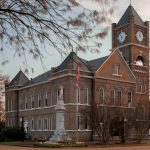 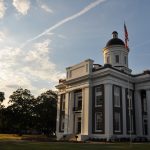 Madison County Courthouse Exterior Restoration
HOW TO GET IN TOUCH