The antebellum Monroe County Circuit Courthouse is one of Mississippi’s oldest continuously functioning courthouse. Constructed of brick load bearing walls and heavy wood framing, the facility was in relatively good structural condition.  The initial focus of the project was acoustic mitigation in the historic courtroom.  The courtroom was decreased in size and reconfigured around 1970. Circular casework and partitions were added in the working portions of the court. This configuration created unusual acoustic patterns – as did the high smooth walls surrounding  the courtroom.  An acoustic engineering consultant analyzed the space and made recommendations to correct the acoustic issues.  Full A/E services were provided to restore the courtroom to its original configuration. Acoustic curtains were added at the windows and at the judges location.  A high performance acoustic plaster finish was incorporated into the upper areas of the court wall.  A detailed audio visual system was also incorporated into the courtroom. 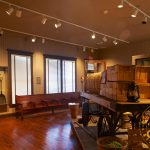 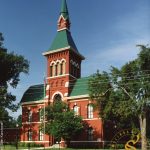 Tate County Courthouse Restoration & Addition
HOW TO GET IN TOUCH