MERIDIAN —     With several historic county buildings downtown, Lauderdale County is likely to have its hands full when the time comes for renovations. Thanks to a grant from the Mississippi Department of Archives and History, a new study will show the county what it’s in for.

The $108,000 grant will go toward a $135,000 study of five downtown buildings, with the county contributing $27,000. The grant is part of a series of more than $2 million in grants that MDAH recently awarded to historic building projects around the state.

The study will serve as a starting point for the county when it begins considering how to approach renovations to the five buildings, Lauderdale County Board of Supervisors President Craig Hitt said.

“We will get the plans and then we will go from there,” said Hitt. “All the buildings need some attention. It’s just a matter of figuring out what we can afford.”

The historic buildings, all located along Fifth Street, are the Lauderdale County Courthouse, the Raymond P. Davis Courthouse Annex (originally the Lamar Hotel), the Mission Revival Ross Building, and Ulmer Building. The study will also include the Lauderdale County Tourism Bureau building, which is not of historic significance in and of itself but is included because of its proximity to the other buildings.

The study will be performed by Belinda Stewart Architects, P.A. – a firm which local officials said has a strong record staying within budget on historic restoration projects.

The four historic buildings included in the study have been designated by the state as Mississippi Landmark buildings, which gives MDAH jurisdiction over their restoration, similarly to the city-owned City Hall and Threefoot buildings.

The courthouse building, constructed in 1905 and extensively renovated in 1939, is of architectural interest because of its Art Deco architectural style and its stone frieze. It continues to be used as a courthouse.

The courthouse annex building, which was originally used as a hotel, now houses several county and county school district offices. It was constructed in 1927 in the Italian Renaissance Style.

The fifth building included in the study is not a  Mississippi Landmark building. It is a former bus depot constructed in 1955.

A summary of the planned study by MDAH states that the four historic buildings all have, “significant repair and restoration needs.” Along with those needs, it said the study will also take into account the county’s space and organizational needs.

According to summary, the goals of the study are to “analyze and determine the needs and make recommendations for each historic facility,” to, “determine the current and near-term space programming and facility needs of the County in relation to these facilities and this area,” and to, “provide preliminary design options to determine the feasibility and cost implications or restoring/rehabilitating these structures to meet the county’s needs.”

Hitt said the study does not obligate the county to do everything that is recommended by the architect.

The 19 grants awarded by MDAH earlier this month also include a $75,529 grant to replace the roof of the Soule’ Steam Feed Works machine shop and the neighboring Hemmings Building.

For more information on the Mississippi Department of Archives and History, visit mdah.state.ms.us. For more on Lauderdale County, visit www.lauderdalecounty.org. 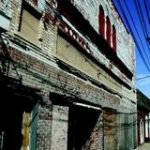 City re-biding roof, facade restoration of The Strand
HOW TO GET IN TOUCH