Town of Sumner faces tragic legacy of Emmett Till case 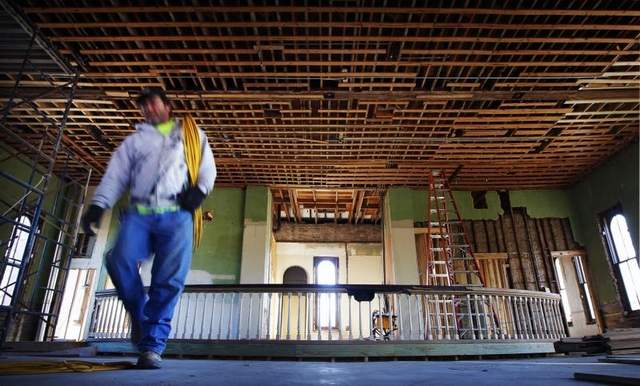 Workers are renovating the Tallahatchie County Courthouse in Sumner. Roy Bryant and his half-brother J.W. Milam were tried at the courthouse for kidnapping, torture and murder in the slaying of 14-year-old Emmett Till in 1955. The trial was a pivotal moment in the formation of the civil rights movement. JIM WEBER/THE COMMERCIAL APPEAL

SUMNER — Just off Emmett Till Memorial Highway, the old Romanesque-style courthouse long ago featured in magazine photos and grainy newsreel clips looms over a town that’s no longer trying to forget its painful past.

Nearly six decades after it hosted one of the most notorious trials in American history — one resulting in the acquittal of two white men charged with in the death of an African-American teen named Emmett Till— the Tallahatchie County Courthouse in Sumner is closed while workers carefully restore the building to its condition at the time of the case.

Across the street, preliminary work has been completed on the Emmett Till Interpretive Center, while on roads such as nearby U.S. 49 East (now also known as Emmett Till Memorial Highway) officials have mapped out a “Civil Rights Driving Tour.”

And along the town square, new businesses are cropping up, including a restaurant, art gallery and decorating store — all encouraged by a racial-reconciliation group known as the Emmett Till Memorial Commission.

The restoration and improvements, which largely will be completed in the spring, culminate a journey that began more than six years ago with a formal apology from the county to Till’s family. It’s all part of a process, residents and officials say, to help the community face the tragic legacy of the Till case and move beyond it.

“It’s part of our history,” said Frank Mitchener, 80, a retired farmer and member of the biracial Till commission. “He (Till), of course, was the catalyst that started the civil rights movement.”

Funded with more than $1.8 million in federal money, plus other grants, the courthouse renovation and associated improvements should lure more of the visitors who already travel to sites made famous during the civil rights struggle, supporters say. Even in its current state, the courthouse has been attracting regular bus tours and school groups.

And places such as the art gallery and restaurant might help keep visitors in town longer.

Located nearly 100 miles south of Memphis, Sumner is a tiny Delta farming town and one of two county seats in Tallahatchie — the other being in Charleston. By 2010, its population had dropped to 316, down 22 percent from a decade earlier.

African Americans make up 56 percent of the county’s population, although the town is two-thirds white. The red brick courthouse, which was built in 1902 and features a memorial to the Confederate cause, rises into view just after visitors turn off U.S. 49 East toward the town whose longtime motto was “A Good Place to Raise a Boy.”

Few people had heard of the place until September 1955, when reporters from across the nation descended on Sumner and its courthouse for the murder trial of Roy Bryant and his half-brother J.W. Milam. They were charged in the slaying of Till, a 14-year-old from Chicago who was visiting family members in the Delta a month earlier.

According to varying accounts, Till had whistled at or offended a white woman — Bryant’s wife — at a grocery in Money in neighboring Leflore County. He later was kidnapped at gunpoint from his uncle’s home in the middle of the night, then severely beaten and shot.

Till’s battered body was found in the Tallahatchie River with a 70-pound cotton gin fan tied to his neck with barbed wire. To call attention to the brutality of the crime, Till’s mother insisted on an open casket at his funeral.

On Sept. 23, 1955, an all-white, all-male jury deliberated barely an hour before acquitting Bryant and Milam. Once they were safe from further prosecution, the two men gave a magazine interview in which they admitted killing Till.

A casket photo of Till’s smashed, unrecognizable face, coupled with the seemingly farcical nature of the trial, exposed the nation to the brutal reality of the Jim Crow South and helped spark the nascent civil rights movement.

Less than three months later, on Dec. 1, 1955, a black woman named Rosa Parks refused to surrender her bus seat to a white man in Montgomery, launching a boycott that galvanized national support for civil rights. Parks would later cite the Till case as one of the reasons she didn’t move from her seat.

Although it wasn’t the site of the crime or the home of the killers, Sumner reaped scathing national publicity from the trial. Time magazine, for instance, wrote that the town “belongs to a Deeper South — one without its own memories of antebellum order or graciousness.”

In the years that followed, Sumner remained haunted and stigmatized by the case, many local residents say.

“It’s just been laying there, like an evil spirit,” said Desaix Anderson, 78, a Sumner native who became a career diplomat and painter and, with his brother Buford, opened the Cassidy Bayou Art and Culture Center on the square two years ago.

“It was always there, even if no one was talking about it.”

Anderson, who served in diplomatic posts throughout Asia and opened the U.S. Embassy in Hanoi, Vietnam, said most Sumner residents were horrified by the case.

“Everyone knew they were guilty,” he said. “That was stunning — seeing that body and having those men acquitted.”

As much as they might have wanted to, local residents did not forget the case. And decades later, the county established the Till commission to work toward healing racial problems.

In a May 2007 ceremony at the courthouse steps, a historical marker about the Till case was unveiled and the commission issued an apology.

“We the citizens of Tallahatchie County recognize that the Emmett Till case was a terrible miscarriage of justice …,” reads the resolution.

“Its legacy has haunted our community. We need to understand the system that encouraged these events and others like them to occur so that we can ensure that it never happens again.”

When the courthouse restoration is complete, the building will serve as both a functioning courthouse and museum on the Till case.

“I think it’s just about being honest and telling the truth,” Stewart said of the project. “The really cool part of the story is the reconciliation that’s occurred.”