The historic square of Downtown Kilmichael, like many Mississippi small towns, was lost to time. It is slowly being rediscovered by those who remember it as it once was and hope to see it thrive again. The owners of The Bank of Kilmichael are doing just that for their hometown. The Bank has long been a community anchor, founded here in 1904 and still serving the community today. Over the years they have branched out to neighboring communities, thus requiring their main branch to expand for necessary additional office, meeting, and training spaces. Instead of relocating, they decided to purchase vacant adjacent downtown buildings to meet their needs and to help revitalize the community. This project includes the expansion of the Bank of Kilmichael into two of the six historic structures they bought on the former Square.  Kilmichael City Hall has relocated into another of the rehabilitated storefront buildings. The additional vacant buildings are being restored in an effort to bring businesses back to their downtown square.

The two buildings housing the bank’s expansion include the bank’s original location and the theater built in the late 1800s. The original bank vault and sloped theater floor remained.  With so much history still intact, the project design not only had to meet the needs of the bank but also tell the story of these structures and the early years of Kilmichael while also implementing ADA accessibility.

The original exteriors of all of the buildings remained intact with the exception of the storefront modifications.  The goal of this project was to restore the original individual character to each of these storefronts.

The exterior masonry façade of the original bank was repaired and nonoriginal elements were removed. The original or early glass block windows were also restored. A new door was provided, with a new awning appropriately installed above.

Very little of the interior of the buildings remained.  Original elements were restored and featured, such as the original bank vault.

The new and larger Boardroom is located just inside the front of the original bank. It boasts a new pressed tin ceiling designed based on the original style of remnants found behind the ceiling tile during the demolition phase.

The remaining layout was reworked to include a Hallway to serve as connection from the Main Bank to the new amenities including a Breakroom, two public Restrooms and another access to the original theater that includes a Lobby, Training Room, and Catering Kitchen.

The original vault remained, but the door and pediment as seen in a historic photo had been removed. A new door with antique style hardware was installed along with a new pediment inspired by the original design. Mosaic tile was found under layers of vinyl based material , but severely deteriorated, so new mosaic tile was installed using a historically inspired, square one inch tile pieces cut into a Greek key border and numbers in the founding year of the bank.

New public restrooms give a nod to the historic architecture of the building with complementary tile finishes and color scheme.

Historically detailed interior partition walls with glass were installed in both buildings to provide separation of spaces while also keeping the space open and complementing the original historic character of the buildings. New interior doors did the same, custom ordered to recreate the 5 paneled design style found on salvaged doors.

The plaster walls in the original theater were restored and a new gypsum wall installed to provide separation for a private catering kitchen in the back of the building.

The program of the Training Room compliments the historic theater design and serves its new purpose with the sloped floor remaining but finished in materials to add acoustic treatments as well as the restored original beaded board ceiling that is still visible with the addition of drop ceiling clouds.

The historic square of Downtown Kilmichael is being revitalized and the Bank of Kilmichael project has proven by example that historic buildings are worthy of restoration and can be economically impactful to a downtown area while also retaining the historic charm.

The Bank of Kilmichael is leading the revitalization of the historic square of downtown Kilmichael.   They are the ultimate good neighbor in a small community that has lost more than it has gained in the last decades – until now. 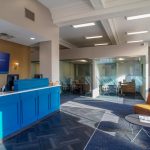 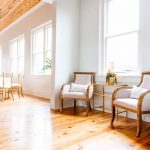 The Mason Boutique Hotel
HOW TO GET IN TOUCH